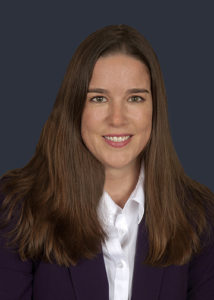 Sarah joined HCC in 2019 as an Associate in the Workers’ Compensation Department. She is licensed to practice before the state courts of Rhode Island, Massachusetts and Connecticut. She is also admitted before the U.S. District Court for the District of Rhode Island.

Sarah began her legal practice in 2006, defending employers and insurers before the Rhode Island Workers’ Compensation Court. She then sharpened her litigation skills by representing, at jury trials, plaintiffs and defendants involved in negligence cases in Massachusetts and Rhode Island. During this time, she also represented employees in workers’ compensation matters.

She is a member of the Rhode Island Bar Association.