Larissa joined the firm in 2016 as an Associate in the Litigation Department. She is admitted to practice in the state courts of Rhode Island and Massachusetts, as well as the U. S. District Court for the District of Rhode Island. 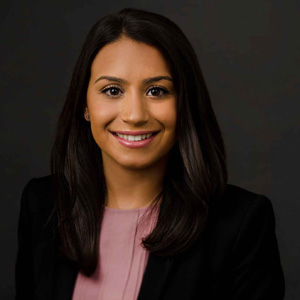 Prior to joining HCC, Larissa worked as a judicial law clerk for the R.I. Workers’ Compensation Court. While serving as a law clerk, Larissa assisted with publishing decisions for the Appellate Division which established binding precedent for Rhode Island workers’ compensation law.

During law school, Larissa served as a judicial extern for The Honorable O. Rogeriee Thompson of the U.S. Court of Appeals for the First Circuit. In addition, she was a research assistant to the Dean and Associate Dean. She received the CALI distinction for Advanced Torts, Criminal Law, and Criminal Procedure.

Larissa’s practice focuses on civil litigation, including insurance defense, product liability, and premises liability. She has also recently focused on the defense of asbestos-related claims against various product manufacturers and distributors across the country. Larissa has an extensive motion practice, and has successfully drafted and argued various dispositive motions before the Rhode Island Superior Court.