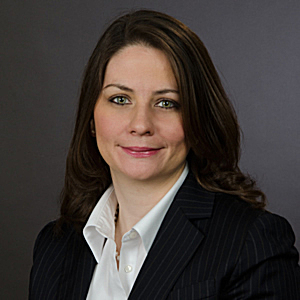 She graduated from the College of the Holy Cross and received her J.D., magna cum laude, from Roger Williams University School of Law. While in law school, She served as Associate Editor of the Roger Williams University Law Review. Kristina’s practice focuses on civil litigation with an emphasis on premises liability, transportation litigation and insurance defense. She has tried multiple cases to a conclusion and has also participated in the trials of multiple wrongful death cases. She has extensive experience arguing numerous dispositive and discovery motions. Kristina is also well-versed in arbitrations, mediations and other forms of Alternative Dispute Resolution.

Following a recent bench trial in Providence County Superior Court, Kristina secured a verdict in favor of the defendant, a major national retailer, in a signiﬁcant premises liability case. The case was on appeal from the District Court where Kristina had also secured a defense verdict.

In 2018 and following a six-day jury trial in a R.I. Superior Court, Kristina secured a jury verdict in favor of the defendant, a national transportation company.