Kelsey joined Higgins, Cavanagh & Cooney in 2019 as an Associate in the Litigation Department after serving as a law clerk with the firm for more than two years. She is admitted to practice in the state courts of Rhode Island and Massachusetts. 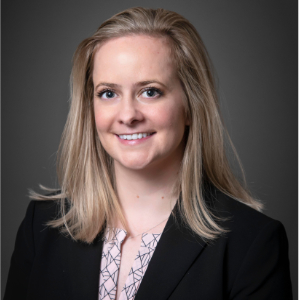 Prior to joining HCC, Kelsey served as a judicial extern for Chief Judge William E. Smith of the U.S. District Court for the District of Rhode Island. She also interned at the R.I. Office of the Attorney General in both the Appellate Unit and Child Abuse Unit.

In addition, she was a research assistant to both the legal writing specialist and professional responsibility professor at Roger Williams School of Law. During law school, she received a CALI distinction for professional legal writing.

Kelsey was a member of Moot Court and was President of Moot Court during her third year of law school. Kelsey was also the recipient of Best Overall Oral Advocates Award at the UCLA Cyber Crimes Moot Court Competition in Los Angeles. This annual moot court competition is open to law schools across the nation, exploring cutting-edge issues in the field of cyber law.

Prior to entering law school, she was employed by a leading financial institution as director of business operations.